The articles in this special issue offer powerful transdisciplinary testimony to the rich potential of the contemporary return to mimesis, and in doing so suggest ways in which the mimetic turn and the post-literary turn may be understood as critically supplementing each other. In this short accompanying video Guest Editor Nidesh Lawtoo offers a foretaste of what readers can expect.

Based on a HOM conference held at KU Leuven, this special issue of CounterText on The Mimetic Condition (ed. Nidesh Lawtoo) joins forces with Jean-Luc Nancy, Gunter Gebauer, Christoph Wulf, and many others in order to promote a mimetic turn, or re-turn of attention to mimesis across different areas of critical theory. In the process, it proposes steps to a new theory of homo mimeticus to face some of the main–pandemic, political, environmental…– crises that cast a shadow on the present and future. Sample chapters available HERE& an Introductory VIDEO HERE.

Jean-Luc Nancy is internationally known for launching the concept of “community” on the philosophical scene. But what is the mythic experience that gave birth to his community in the first place? Where was this scene set? And who are its protagonists? In this singular-plural Prelude shot in the summer of 2020, Nancy begins to narrate the myth of the Strasbourg community to Nidesh Lawtoo, addressing a world that “is soon going to disappear”…

The French philosopher Jean-Luc Nancy (1940-2021) sadly passed away on August 23, 2021, at the age of 81. One of the last giants of the structuralist and poststructuralist generation, Nancy authored over 200 books on subjects as diverse as German idealism and psychoanalysis, aesthetics and politics, subjectivity and community–devoting one of his last books to An All-Too -Human Virus (2021).

Nancy last visited the HIW in 2018 at the invitation of the HOM Project and gave a series of inspiring talks, seminars and interviews on mimesis, politics, and community. He will be much missed, but his philosophical traces remain to be followed up.

You can rewatch two video interviews at the HIW on HOM Videos, including one for VETO. More recently, in a written dialogue with Nidesh Lawtoo, Jean-Luc Nancy takes the recent return of attention to mimesis, the mimetic turn, as a starting point for considering the relationship between philosophy and literature. Reflecting on his lifelong philosophical project, Nancy stresses the centrality of mimesis at play in the linguistic turn, deconstruction, community, and sharing during and beyond Covid-19. Interview available here.

Tune in on Thursday, October 8, at 8pm for the premiere of the latest episode of HOM Videos, Jean-Luc Nancy: Philosophy and Mimesis. Topics discussed include the relation between philosophy and literature, myth, politics and community. Sign up via this link:

Join us for the first session of the HOM Seminar on Friday, October 2, 4pm, Room N, Institute of Philosophy, KU Leuven. Presentations by Nidesh Lawtoo on the “mimetic turn”, new HOM-team member Carole Guesse on “posthuman mimesis,” and discussion of an interview with J. Hillis Miller, supplemented by a screening of Jean-Luc Nancy. More details here: https://hiw.kuleuven.be/hua/events/hom-seminar

Please register by sending an email to: niki.hadikoesoemo@kuleuven.be

In the fifth episode of HOM Videos, Nidesh Lawtoo meets French philosopher Jean-Luc Nancy (U of Strasbourg) to discuss the ancient quarrel between philosophy and mimesis. Topics discussed include the relation between mimesis, myth, fascist politics, Lacoue-Labarthe, deconstruction and community.

In a forthcoming interview for HOM to be published in a special issue of CounterText dedicated to examining what we call a mimetic re-turn in the post-literary sphere, Jean-Luc Nancy and Nidesh Lawtoo take a deep look at various mimetic phenomena that characterize the current condition of homo mimeticus, among them the recent surge of (new)fascist tendencies in contemporary democracies and the COVID-19 crisis. Both (new)fascism and viral contagion are paradigmatic mimetic phenomena—but how are they related?

Let’s begin with what Lawtoo calls (new)fascism. For Nancy, the recent surge in this phenomenon owes to a crisis resulting from a condition that belongs to the very definition of democracy. In a democracy, Nancy argues, there is nothing that stands in for its representative, the demos, until the performative moment—paradigmatically in the French Revolution—in which the people names itself as such: “we, the French people declare…” In this sense, Nancy says, democracy is perhaps a kind of “mimesis without a model” as theorized by his collaborator, Philippe Lacoue-Labarthe. Fascism’s recurring trick, both in the early twentieth century and today, consists in taking advantage of technological and economic crises to declare itself as “the truth of the people,” thus giving the people a figure, a series of representations that seek to fill a spectral absence at the heart of democracy by presenting themselves as the people itself. While the symbols employed by early twentieth century forms of fascism consisted of imagery and symbolism drawn from ancient Rome, contemporary figures combine more multifarious sources in the absence of the unifying force that classical culture held under Hitler and Mussolini.

Moreover, Nancy continues, political philosophy since Rousseau conceives the community as an organism in which all its parts are integrated into a unity whose end is itself and which subordinates some parts of the body to others according to their function. “If I am the little finger,” Nancy quips, “I cannot do as many things as, for example, the eye can.” Early fascisms have taught us that carrying this organic metaphor to completion is not only impossible, but leads to unimaginable catastrophes. On the other hand, however, the relative disappearance of the nation today also poses problems for state democracies, whose unity consists of mere remainders in immense technological and economic networks that leave subjects feeling lost, abandoned, purposeless. For Nancy, this is an aporetic condition: either one projects oneself completely to the outside—“thus one is necessarily a philosopher or an artist”—but ends up detached from society, or one mourns the loss of the nation while building the kind of resentment that Nietzsche and Scheler described as the consequence of the unbearable loss of connection.

In this respect, Nancy says, the recent COVID-19 pandemic “offers us a magnifying mirror of our planetary contagion.” Indeed, as Nidesh Lawtoo has noted in a recent post for The Contemporary Condition, this crisis is a mimetic phenomenon in more than one way: not only because of the literally viral process of copying that enables it to reproduce itself through other living beings, but because of how it renders subjects vulnerable to affective contagion—from anxiety and panic to solidarity and sympathy.

Nancy’s “magnifying mirror,” also affords him an opportunity to envision the difficulties the crisis portends for our collective futures:

We have the same fears, the same expectations—the end of capitalism and the beginning of ecological cleansing or, on the contrary, threats to freedom—and everything is extremely expected, repetitive, and codified. At the same time, it is a contagion that is developing less perhaps because of the severity of the sanitary risks than because of the important differences between countries, governments, and opinions. All of a sudden, the world seems deprived of direction or support. All of a sudden, states become important again. All of this moves slowly towards a tomorrow which will be complicated and conflictive in various ways, since it will be mixed with ecologic problems that are still awaiting our attention—and all of this will take place in what, as it seems, will be a very problematic economy.

But the interesting question is whether something can produce a new contagion: something new that I will call spiritual, as this is where things must go. I would like to say through the spirit of a world. It was through the plagues and the wars of the fourteenth and fifteenth centuries that Europe invented humanism and capitalism, classical art, the thoughts of reason and experience as well as literature. Machiavelli described the plague in Florence at the same time as he developed a concept of the modern state. However, he and the others of his time did not have behind them a history that had run out of breath…

The mirror is an old metaphor for mimesis—as old as Plato’s denunciation of the ontologically-degraded status of what is reflected on its surface. A magnifying mirror, however, calls attention to the effect that the mirror itself has upon what is reflected—it exposes the trick that Plato intended to carry out by dubbing the products of mimesis an unsubstantial reflection. The magnifying mirror transforms that supplementary reflection into a tool for detailed analysis, an analysis that, unlike a magnifying glass, is not directed at an object but at the subject itself—it is not a tool for theoria or contemplatio but one forreflectio. As in the overarching trope of the mirror in Renaissance vanitas paintings (contemporaries of the turning points, the krises, that Nancy evokes), the mirror also reveals veritas: the motivations, inclinations of the onlooker and, in case of memento mori paintings, of their mortal—and mimetic—condition.

Allegories, as Walter Benjamin once noted, reveal truth as a historical process of decay. To follow Nancy in approaching the virus as a magnifying mirror is to remember that the true causes of the crisis lie elsewhere: in the unequal conditions caused by global capitalism, in the supplementary role of (new)fascist leaders that presume to give a figure to a people that does not appear as such, in the technological co-optation of attention and information through digital media that allow for (new)fascist leaders to shape global narratives; as this happens, biological contagion continues its spread—disproportionately affecting the most vulnerable racialized populations in North and South America—leaving in its wake a death-toll whose official numbers are but a phantom of the true extent of the crisis.

In this new book, part of the ERC-funded HOM Project, Nidesh Lawtoo confronts the rise of (new) fascist leaders, both in Europe and the US, via a diagnostic of the contagious, communal and mythic powers mimetic leaders convoke to shape mass/public opinion. 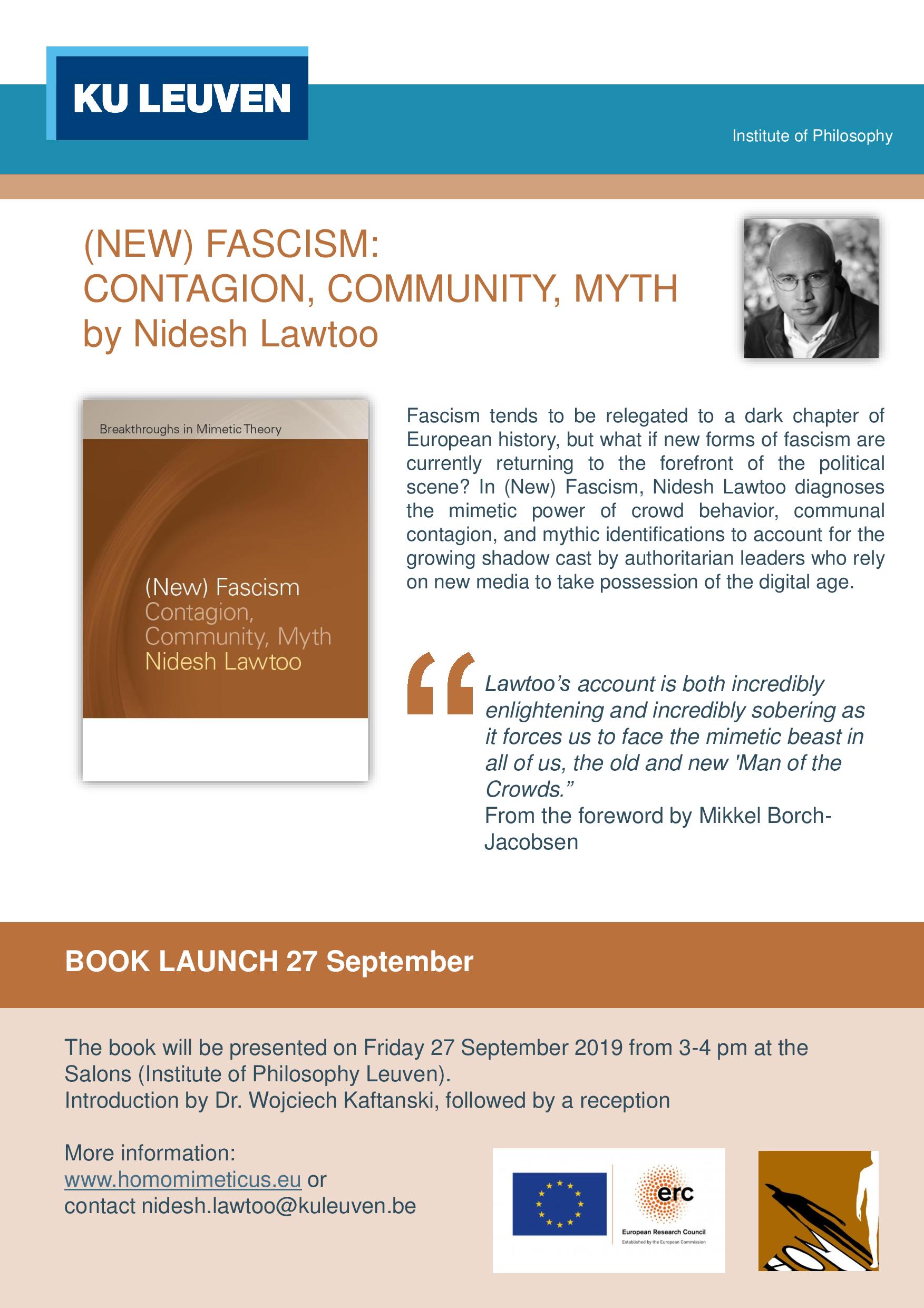 This article reconsiders the power of myth in light of the rise of new fascist leaders who cast a shadow on the contemporary political scene.  Nidesh Lawtoo looks back to Lacoue-Labarthe’s and Nancy’s, “The Nazi Myth,” to account for the affective power of myth that is currently being reloaded both in Europe and the US–an argument internal to a forthcoming book on (New) Fascism (2019). Article available here. 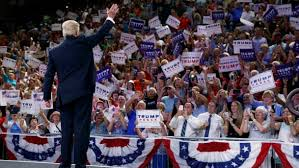